Most people don’t realize that soil or soil-less substrates are so much more than just dirt. Yes, plants do need a medium for their roots to take hold, but there’s so much more involved. One quick look using a healthy soil sample under a microscope and you'll quickly realize that it's very much alive. In fact, it's an entire living ecosystem, just on a much smaller scale. As you move the slide around and focus on specific areas, you’ll see large communities of micro-organisms also known as microfauna, as well as fungi, many of which have a very special symbiotic relationship within the complex nutrient cycle. We’ve yet to fully understand how they all interact with one another in this microscopic environment. Read more about why adding leaf litter to your soil or substrate can be very beneficial to your plants?


SO, WHAT IS NUTRIENT CYCLING?

Before we continue, it’s important to understand what nutrient cycling is and the role microorganisms play.

“Nutrient cycling is one of the most important processes that occur in an ecosystem. The nutrient cycle describes the use, movement, and recycling of nutrients in the environment. Valuable elements such as carbon, oxygen, hydrogen, phosphorus, and nitrogen are essential to life and must be recycled in order for organisms to exist”. (Bailey, 2020)

In the nutrient cycle, beneficial microorganisms harvest the nutrients from the soil’s organic matter. These include what is referred to as ‘parent materials’, such as rocks, pebbles, sand particles, silts and clays. On a molecular level, these parent materials are comprised of crystalline structures that are not easily broken down. These structures contain atoms of iron, boron, phosphorus, calcium, potassium, and others. Plant’s roots are not capable of directly accessing the nutrients in these structures.

THE SYMBIOTIC RELATIONSHIP BETWEEN BACTERIA, FUNGI, AND PLANTS EXPLAINED.

This is where bacteria and fungi come in. They produce enzymes that break-down these crystalline structures, thus releasing the nutrients they contain. The bacteria and fungi are able to absorb these nutrients processed by the smaller microorganisms. And in turn are consumed by larger predatory microbiota that subsequently excrete the waste of what they consumed. This nutrient dense liquid waste is the food source that plants are able to absorb directly through the root (Ingham, 2020).

Plants, in turn, produce simple sugars in a process called photosynthesis. They then, through their roots, inject approximately 30% to 40% of these sugars (along with other compounds they produce, collectively known as exudates) directly into the soil where the microorganisms reside. This is a deliberate action; taken in order to feed bacteria and fungi whose numbers then grow as a result. The plant is effectively making an investment in these microorganisms. Once the bacteria and fungi have begun to harvest nutrients by mining the parent material and decomposing organic matter, the plant will receive a return on its investment, assuming the microorganisms are present in the soil near the roots. This is a critical factor which highlights the importance of microbiology in your plant’s soil (Ingham, 2020).

In addition to the Nutrient Cycle, there are many Biogeochemical cycles that must occur for a healthy eco-system. They include the Carbon Cycle, the Nitrogen Cycle, the Oxygen Cycle, the Phosphorus Cycle and more. The image above depicts two of the cycles as an example.

WHY IS LEAF LITTER AN IMPORTANT PART OF THE NUTRIENT CYCLE?

Leaf litter creates structure in the soil, which is especially important for the nutrient cycle to occur. It does this by forming a thick mat which provides shading for the soil. The leaf litter also slows down evaporation holding precious moisture near the root zone for the surrounding plants. The lower layers of leaf litter will slowly decompose, depositing nutrients back into the soil while stimulating the propagation of beneficial bacteria, fungi, and worms, all of which play an important role and are desirable for healthy soil structure.

Leaf litter is also one of the essential building blocks in nature, helping maintain a vibrant nutrient cycle. Yes, just in case you were wondering, the leaves do eventually become part of the soil. And, yes, “mold” can be involved in the process, but most of the time, as long as the setup was put together correctly, it’s good to have around. We have become accustomed to reacting negatively when we hear the word mold, however, do not let its nasty reputation fool you. When it comes to horticultural mold, it's a sign of life and an important part of the nutrient cycle. Mold actually helps break down the organic material. As the leaf litter is broken down and starts to decompose, water and many inorganic nutrients such as nitrogen and phosphorus leach back into the soil, where they can be taken up again by plants to foster new growth.

The table below is just an example of how leaves return essential nutrients back to the soil structure as they decompose. Just as with humans’ plants also need many of the same nutrients to survive and prosper. 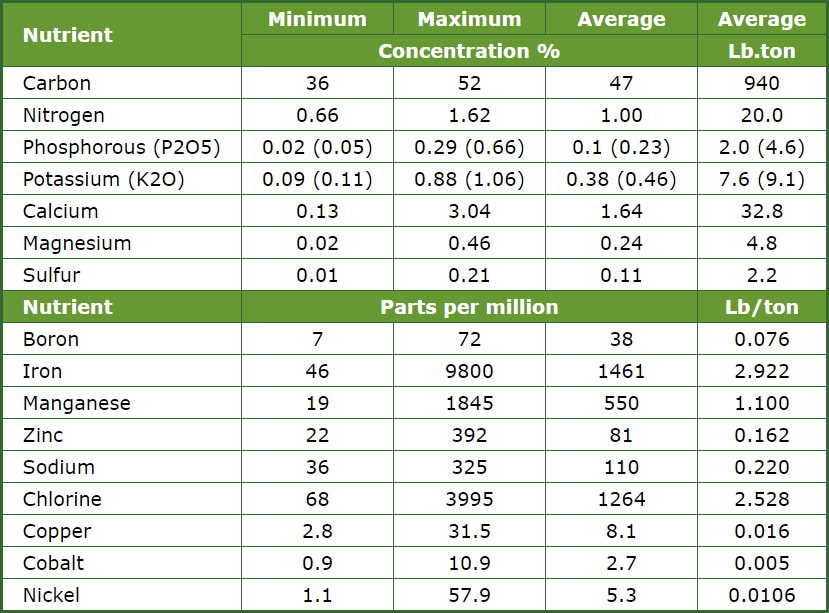 There are many types of leaves currently sold in the reptile and amphibian hobby today, but did you know that not all leaves available are equal? Yes, some leaves decompose slower, making them last longer, while others provide food for microfauna such as pill bugs and springtails. No, I’m talking about leaves that actually have additional benefits? Fish hobbyists have known this for many years and have adopted the use of these leaves in their aquariums based on their needs. The leaves I am referring to have been found to have anti-parasitic, anti-bacterial and anti-fungal properties, thus keeping the water free from pathogens, resulting in better quality water and healthier and stronger fish. These same leaves can be added to your substrate mixes to provide similar benefits.

Be sure to check out our store, we provided detailed descriptions for each leaf type and if applicable, the additional benefits it provides.

*Avoid leaves that may be significantly toxic, like oleander, in your vivaria that house herbivorous herps or frogs.

*Please reach out to our staff if you have any questions.

Fully composted leaves are very fine with almost a soil like consistency. The color is usually dark brown, crumbly, with an earthy organic smell that is not foul or offensive. Fully composted leave material can be found in the lower layers of the leaf litter resting on top of the soil. Due to the advanced state of decomposition, it is an immediate source of nutrients for you plant roots and microorganisms.

Bioturbation with and without soil fauna.